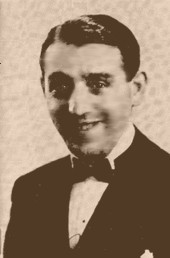 Sam Browne, born in London, became one of the most popular British dance band vocalists of the 1930's. He is particularly remembered singing with Ambrose and his Orchestra, at the May Fair Hotel and Embassy Club, with whom he made many recordings from 1930 to 1942.


During about a year and a half Sam Browne made over 100 records with Jack Hylton including sessions in Berlin and Milan, and was to return to the studios with the Hylton band in 1938-40.

Sam first recorded with Bert Ambrose's band on Feb 8th 1930, the titles were 'A Little Kiss Each Morning' and 'Body And Soul'. The latter (3rd take) is an astonishing recording, a great arrangement the record lasts for over 4 minutes, and Sam's vocal is clear and emotional. It was recorded again on Feb 22nd with the added bonus on a violin solo (Eric Siday). Both takes can be found on copies of Decca M-118 and later re-issued on M-402. Another early Ambrose Decca record with Sam to look out for is 'Lucky Me Lovable You' (M-122). By March Ambrose had switched to the HMV label and some superb Sam Browne recordings began to appear like 'Moanin For You' (B5813) 'Cryin For The Carolines' (B5814), 'A Bench In The Park' (B5842), 'Leven Thirty Saturday Night' (B5847). In an interesting recording of 'Shoo The Hoodoo Away' Sam teamed up for a duo with Ella Logan but on this occasion Ella's very bluesy rendition makes Sam sound very 'straight'!

Sam's work with Ambrose took him to some fancy places like Monte Carlo and Biarritz,and of course there were regular radio broadcasts from the May Fair Hotel. Sam and Elsie Carlisle became a very popular singing pair with Ambrose.

A very good reader of music, Sam's confident and warm delivery made him very popular with bandleaders and record buyers. Listen to this short excerpt of Sam singing 'Brighter Than The Sun' recorded with Ambrose and his Orchestra on Jan 24, 1933, and issued in Britain on Regal Zonophone MR-831.

Sam's voice is easily recognisable and it has been quite an easy task for discographers to identify many of the anonymous 'vocal refrains' on records by the less famous bands. It's obvious now that Sam made over 1000 recordings. Bands that featured Sam on many records include Alfredo (on Edison), Bertini (on Eclipse), Harry Bidgood (on Broadcast), Harry Hudson (on Edison), and of course Lew Stone and about a dozen more.

Not regarded as a 'jazz' singer, Sam Browne nevertheless performs very adequately on a number of hot dance records, and as well as some of the early Ambrose recordings Sam also sang on a few other hot recordings by the bands of Jay Wilbur, Six Swingers etc. Sam is featured in several British films, including Calling All Stars, Variety Parade and Hi Gang, as well as numerous film shorts. I was involved in the recent discovery of a home movie featuring Sam Browne meeting Al Bowlly.

Sam Browne worked with Bebe Daniels and Ben Lyon during WW11 in the 'Hi Gang' radio series, and after the war continued to tour and record.

I don't want to dwell too much on Sam's private life, it had it's many ups and downs and the story belongs in a proper biography which I suspect will be written soon. Chris Hayes wrote a three part article on Sam in Memory Lane in 1976. Those back issues are very difficult to find. Earlier, Don Thompson of the BBC made a half hour interview/documentary about Sam Browne, and in the process discovered an imposter who had impersonated Sam for years!

Some brief details about Sam's life. Sam's first wife, Terry, died at an early age in 1931. He remarried a few years later. Sam enjoyed gambling and betting, and later became a London club owner first in Maddox Street and later in Wardour Street. His second marraige broke up in 1954 as his career waned and he was getting into debt. At his lowest point he served a short prison sentence.
Sam had 10 brothers and sisters, three of his sisters are certainly alive. Sam had two daughters, Myrna and Carole.

A Sam Browne Appreciation Society has recently been founded, details on my 78rpm Clubs page.

There is an active discussion group where you can talk about Sam Browne and the great British dance bands:

Some of Sam Browne's dance band recordings were issued in the USA and Canada. I'm trying to make a full list of the North American issues. I am grateful to Mickey Clark for some of this list. E-mail me if you can add to this list :

with Bert Ambrose and his Orchestra

E-mail me, John Wright, if you want to know more about Sam Browne or another British artiste or band