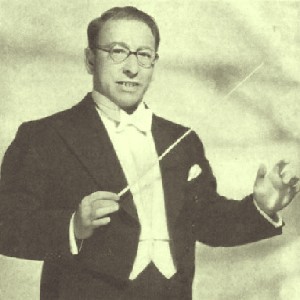 I have been contacted by the family of Louis Levy who are very keen to locate any original musical scores directed by Louis. Carol Wood writes:

"The family of Louis Levy would like to know if anyone knows how to get hold of original scores of his dance band music. It may be possible some day for one of the younger family members to perform it once again in his memory".

This would be an exciting event supported by all fans of dance band music. The music of Louis Levy has recently had a revival of interest with several CD's issued featuring his Gaumont British Dance Band and the larger orchestra known as the Gaumont British Symphony that played music for countless films in the 1930's and 40's. The dance band recorded about a dozen titles in 1934 for the Regal Zonophone label and the featured vocalists included Sam Browne, Harry Bentley, Three Ginx. The Gaumont-British Symphony made many more recordings for Columbia and HMV, and although much of the output is strictly film score, not intended as dance music, there were many recordings which can be regarded as dance music, some featuring vocalists Eve Becke, Janet Lind, Judy Shirley, Gerry Fitzgerald and others. 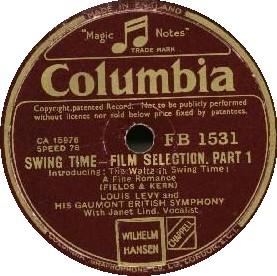 The Film Selections recordings and the 'Music from the Movies' records can't be ignored by dance band fans. When the records are played today the arrangements still sound bright and lively, and not really dated. Many music arrangements were written by Peter Yorke. Film scores directed by Louis Levy in the 1930's included Thirty Nine Steps, Goodbye Mr Chips, A Girl Must Live and many others listed on the Musical Directors page. It isn't clear how much music was actually written by Louis Levy - a short search of the internet has found some information, see What music was written by louis Levy?

Crystal Stream Audio (Australia) must be applauded for the recent release of NINE Louis Levy CD's which include ALL the recordings on Regal Zonophone, HMV and Columbia together with some of the Decca recordings, covering the years 1934-51. Further details, sound samples and ordering instructions can found at their website Crystal Stream Audio

A CD of 'Music from The Movies' was issued in 1997 by Empress (RAJ CD 884) featuring the Gaumont British Symphony.