Lew Davis was one of the most highly respected trombone players in Britain in the 1930's. I have been in contact with members of Lew's family for over a year now and I am particularly grateful to have received a copy of a home movie featuring Lew Davis as well as Al Bowlly, Nat Gonella, Tiny Winters etc.

I have prepared this webpage as a tribute to Lew Davis, a great musician so often to be heard on the best 78's of danceband music recorded in Britain. 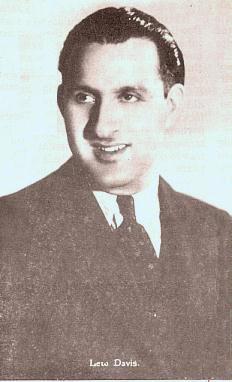 Lew Davis appears to have joined Jack Hylton's band early in 1923, and is listed as being present as the only trombonist at all sessions from February 1923 through till June 1928, so any trombone heard on Hylton records from that time is almost certainly Lew Davis. Lew was joined on trombone by Leo Vauchant from June 1928 and also Paul Fenhoulet from February 1930. One of the favourite 'hot' recordings by Hylton musicians was issued on HMV B5422 as Jack Hylton's Rhythmagicians, here is Lew Davis's trombone solo on Grieving For You (Vauchant is not present on that recording). When Lew left Jack Hylton's band around October 1930 Les Carew replaced him. Lew continued working and attended recording sessions with the Roy Fox band (pre-Monseigneur Restaurant) and Harry Hudson.

Lew Davis was with Ray Noble (New Mayfair Dance Orchestra) from Dec 1932 to Sep 1934. There were two trombone players regular then, the other was Tony Thorpe. Although it's not always certain, it's usually Lew with the solo breaks. There's a series of Noble CD's out now, with all the vocal items featuring Al Bowlly, and some of those feature trombone breaks. Lew won't be on the early volumes, to hear him you want Volumes 5 to 9 of the Vocalion series available at: Dutton Vocalion

I expect Lew Davis is the star performer rasping his way into the introduction on Ray Noble's recording of Nasty Man, and following up with a moanin' dog bluesy accompaniment to the rather sexy vocal of Dorothy Carless.

Lew Davis was with the Ambrose Orchestra from Dec '34 till 1937, with a few gaps when he was with Lew Stone. Tony Thorpe was also with Ambrose and there was another great trombone player with the orchestra, Ted Heath. Again Duttonlabs feature Ambrose and the Lew Davis trombone, on Vocalion CDEA6002, if they still have stock.

Click to see a large photo of the Ambrose Orchestra in which Lew Davis can be seen behind Ambrose's left shoulder.

An example from my 78 collection, Lew Davis can be heard with the Embassy Rhythm Eight ensemble playing Hitchy Koo, and you can listen to this jazzy break played by Lew Davis (tb), Max Bacon (dr) and Dick Ball (sb).

For Lew Stone Orch, Lew Davis was in and out of that band and hot/jazz was featured only rarely. Lew was certainly the lead tb from 1932 - Nov 1st 1934, at the Monseigneur Restaurant, and during that time the band did record White Jazz/Blue Jazz. There is an expensive CD, Best of Lew Stone 1932-34, available from: Audio Street There was a also set of CD's of the Monseigneur band issued by a company called Claves (in Europe somewhere) and they have been seen on sale on websites like Audio Street.

Lew's own group are featured on the Empress CD RAJ 864 (1996) Music was Our Business which features hot titles from musicians and small groups recording outside of their job with the larger British bands of the '30's, and there are titles featuring Lew Davis, Nat Gonella, Freddy Gardner, Hatchett's Swingtette etc. That CD might be obtainable from Amazon.co.uk or Audio Street or some good record shops. Here is an excerpt from the Lew Davis Trombone Trio recording of Three Of A Kind.

There is a very good Cartoon of Lew Stone's Band where Lew Davis is seated behind Al Bowlly.

Below is a photo of the Ray Noble band setting off to Holland in mid 1933. You'll see Nat Gonella and Al Bowlly (2nd and 3rd from the left) and we think that Lew Davis may be the fella 5th from the right. (Ray Noble is wearing those neat plus-fours). All these musicians are featured in a recently discovered home movie 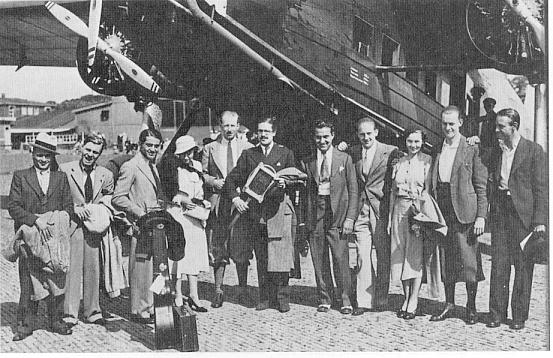 There is an active discussion group where you can talk about Lew Davis and other musicians who worked with the great British dance bands: